I'm going to be replacing my current home security system with one I'm building.  This will ultimately morph into a Home Automation System.

Here are some of the highlights and design decisions:


I will document the design, development and deployment of this system.

My Background: I have significant electrical, electronic, and software capabilities, and this project is within my scope of expertise and experience.
Posted by Banjo at 6:25 PM 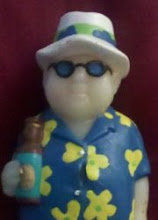 Retirement - where every night is Friday night, every day is Saturday, and the only thing you 'have to do' is the dishes.